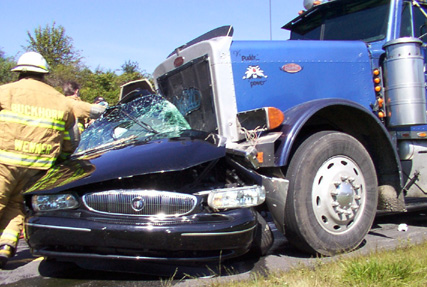 Every 16 minutes, a person is killed or sustains injuries in accidents involving 18-wheelers, tractor-trailers or semi-trucks

– 4,669 were large trucks involved in fatal truck accidents
– Large trucks are more likely to be involved in a fatal multi-vehicle crash than are passenger vehicles.

Defects contribute to the number of large truck accidents each year. Some of these defects include:

About 700 heavy truck drivers and passengers in truck cabs die each year. In addition, almost 3,700 persons in cars and other passenger vehicles die annually in collisions with heavy trucks.
The Insurance Institute for Highway Safety reports that in crashes involving large trucks and other vehicles, 98% of the fatalities occur to the people in passenger vehicles.

The National Highway Traffic Safety Administration (NHTSA) has warned groups using 15-seat passenger vans about the dangers of fully loading the vans and then putting an inexperienced driver behind the wheel. The NHTSA also stated that 15-passenger vans are large trucks and should only be driven by people with experience driving large trucks.

The majority of fatal crashes involving tractor-trailer trucks include trucks that are pulling one trailer. A recent survey showed that 64% of fatal truck crashes had one trailer. Thirty-two percent of those involved single-unit trucks (no trailer) and fewer than 4% of the those involved multi-trailer vehicles (more than one trailer).

Nationwide Truck Accident Lawyer directory that provides listing of Semi Tractor Trailer Accident Attorneys in all US states. Find attorneys and law firms in your area specializing in Truck Accident litigation and get a free case evaluation.